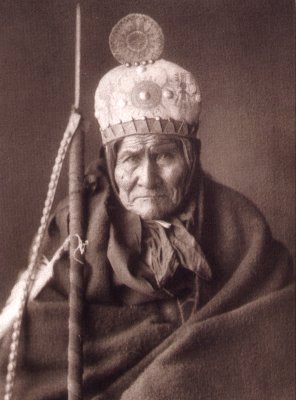 I really don’t know what’s up with Yale lately. They aren’t doing so well in the archaeology, cultural sensitivity and repatriation department, with news that they may actually have had the remains of Apache leader Geronimo

. It was a rumor, before news of this came out, that their secret society “Skull and Bones” had Geronimo’s skull and femur. But now people have recovered old documents that found a written letter from 1918 from, where one “Bonesman” to another saying,

…announces that the remains dug up at Fort Sill, Oklahoma, by a group that included Charles C. Haffner Jr. ’19 (a new member, or “Knight”), have been deposited in the society’s headquarters (the “Tomb”): “The skull of the worthy Geronimo the Terrible, exhumed from its tomb at Fort Sill by your club & the K — t [Knight] Haffner, is now safe inside the T — [Tomb] together with his well worn femurs[,] bit & saddle horn.”

I don’t mean to over react but with fresh news of Yale’s iron grip over Peruvian artifacts… I’m sure this won’t be beneficial for the university. I wonder how archaeologists in Yale feel. Their absolute silence in both of these situations makes me wonder about their stance and true nature in doing archaeology and being anthropologists.

I also wonder how the Apache feel that Yale supposedly has their hero’s skull and bones in some secret vault. Any Mescalero, Jicarilla, Chiricahua, Lipan, Kiowam or Navajo have any comments on this? I’m interested in hearing what you gotta say.