There’s an awesome story over at National Geographic News on how some isolated tribes in the Amazon are using high tech gadgets to help conserve their rainforest from loggers and such. These are the very same people that we assume are confined to a prehistoric age of technology, which goes to show how malleable our minds and cultures are despite the language and technological barriers.

The story is titled, “Amazon Tribes Use Latest Gadgets to Battle Developers” and it documents the plight of not only the tribes involved but the activists that are introducing high tech gadgetry like satellites, computers, and even Google Earth in their efforts.

So activists have been training these South American communities to use digital mapping technologies such as geographic information systems (GIS) to build maps that definitively outline their properties.Jen Osha is co-founder of the nonprofit group Aurora Lights and a doctoral student in geography at West Virginia University.

“The process of making maps can increase community organization and empower community members in daily relationships with [government] officials, because they now have hard data they can use,”

The Huaorani are mostly talked about in this piece, and the author, Kelly Hearn, writes about how Osha introduced maps into their lives and how they use it to not only defend their lifestyles from encroaching developers, but also

“[How they] are using the maps for a number of things, like defining areas for hunting, tourism, and conservation,” said Jascivan Carvalho of TROPICO, an ecotourism company that has worked with the Huaorani. 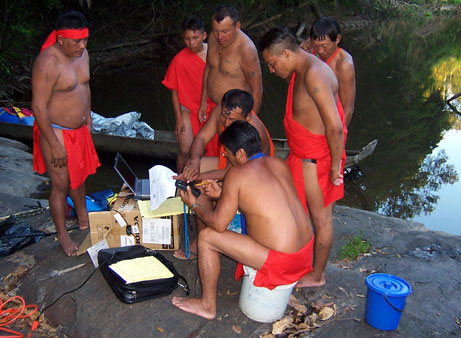 Members of the Sipaliwini of south-central Suriname plan a mapping expedition that will use global positioning system (GPS) technology to define their ancestral territories.

I appreciate this piece because it documents several things. One thing, right off the bat, is the intersection of technology and not only ecological preservation, but also cultural preservation. So long as the Hoaurani and other tribes adopt these forms of technology they will effectively help protect some lifestyle. And as I mentioned earlier, this is an awesome piece because it truly documents that people who live in the forest, or in the desert, or anywhere for the matter aren’t as primitive as popular culture predisposes them to be.