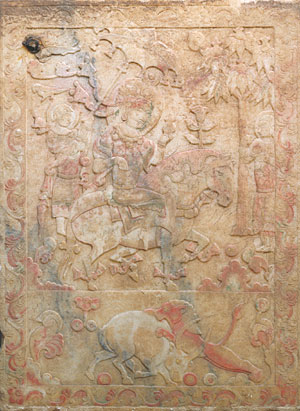 Of course I am biased when I say that I consider anthropology one of the coolest disciplines. But I have reasons as to why I hold this opinion. One of the reasons is that anthropology has and will always be a discipline that integrates and applies methods from other disciplines. The following new research I will share with you is a prime example of what I’m taking about.

In 1999, near the city of Taiyuan, in the Shanxi province, central China, archaeologists uncovered an astonishing find. You may remember it. I do. It is considered one of the most important archaeological finds in 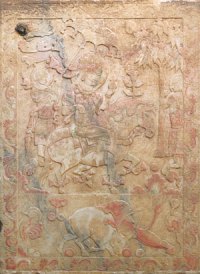 China because this Sui dynasty tomb held a sarcophagus with artifacts from the west. The man buried in the tomb went by Yu Hong and inscriptions in his tomb describe him as chieftain of the Central Asian people who had settled in China during the Sui dynasty (A.D. 580 to 618). Yu Hong died in 592 A.D. His wifey died several years later, and was laid to rest by his side.

If you want, there’s a documentary of the discovery of Yu Hong’s tomb on Amazon’s video download service, Unbox.

I’ve been always curious about this site because of the western artifacts inside his tomb. After doing some digital digging, I found drawings of the reliefs in Yu Hong’s tomb. I have scattered the images around this post. Being Iranian, I clearly can see that these images are not as much Chinese as they are Persian. They look like the images you see on Persian miniatures and inside the Persian Book of Kings, the Shahnameh.

This totally now makes sense, because what is known of Yu Hong is that his career started in service of the most powerful nomadic tribe at the time, known as the Ruru. Adapted from Wikipedia, the Ruru were,

“a confederation of pre-Mongolian nomadic tribes from the northern borders of China that were kicking it strong until about the late 4th century to 6th century. The Rouran are said to be the later appeared in Europe as the Eurasian Avars or Tartars”

More importantly, Yu Hong was posted as an emissary to several countries, including Iran. So now the puzzle pieces start fitting into place. Yu Hong was probably a worldly traveler, making his way up and down the Silk Roads that connected much of Asia to Europe and the Middle East.

But what remained to be answered is what is known of Yu Hong?

In a new Proceedings of the Royal Society B publication, several geneticists from the College of Life Science and the Ancient DNA Laboratory, Research Center for Chinese Frontier Archaeology, at Jilin University in Changchun, China have tried to answer what can be known of Yu Hong’s ancestry from his genes. They analyzed his mitochondrial DNA (mtDNA) which only comes from the mother’s side. They have reported their findings in the following paper, “Evidence of ancient DNA reveals the first European lineage in Iron Age Central China,” and the paragraph below is the abstract where I have highlighted the most important findings,

“Various studies on ancient DNA have attempted to reconstruct population movement in Asia, with much interest focused on determining the arrival of European lineages in ancient East Asia. Here, we discuss our analysis of the mitochondrial DNA of human remains excavated from the Yu Hong tomb in Taiyuan, China, dated 1400 years ago. The burial style of this tomb is characteristic of Central Asia at that time. Our analysis shows that Yu Hong belonged to the haplogroup U5, one of the oldest western Eurasian-specific haplogroups, while his wife can be classified as haplogroup G, the type prevalent in East Asia. Our findings show that this man with European lineage arrived in Taiyuan approximately 1400 years ago, and most probably married a local woman. Haplogroup U5 was the first west Eurasian-specific lineage to be found in the central part of ancient China, and Taiyuan may be the easternmost location of the discovered remains of European lineage in ancient China.”

Now that’s just the genetic evidence they have gathered from his maternal side, so when you read National Geographic claim that this man was European — be a bit skeptical of the headlines. Remember, his Y chromosome can show a much different data. For all we know, his Dad coulda been part of the haplogroup G and married a U5 haplogroup wife which ended up being Yu Hong’s mom. Until his Y chromosome is analyzed, we may never know. What we know is that at least half of Yu Hong genes were most likely European. 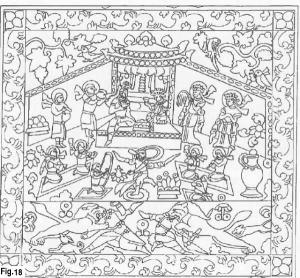 We already knew that Asia was intimately connected with the rest of the world. It did not remain a separate world, although many people may consider that. There are a lot of linguistic, mythological, cultural, musical, medical, etc. similarities between East Asia and East Europe and the Middle East. I mentioned this before, and I’ll say it again, this is so because trade roads were used for thousands of years to connect this massive continent. So this study isn’t all to surprising.

What this study is is a classic synthesis of multidisciplinary approach, with archaeological and genetic evidence. Despite the mtDNA only evidence, the fact that there’s Western artifacts in this tomb and that correlates to genetic data of the inhabitants just simply seem like it goes hand in hand. I hope more archaeological studies do this, especially with the advances we are making in ancient DNA studies.

7 thoughts on “Archaeological evidence supplemented with genetics for Yu Hong”