Many moons ago, I shared with you news on how new tools like Google Earth are being used in archaeology to not only to map known sites but also to survey for new ones. So when I was digging thru my RSS feeds and found a news article on how Sarah Parcak of the University of Alabama at Birmingham has been using satellite imagery to find several previously undiscovered Egyptian settlements, I was definately interested to read more. 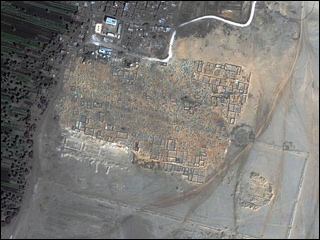 Parack has found several tells in just weeks by using this technology. Normally it woulda took years. She became the first Egyptologist to use the methodology in 2003-2004, when she located 132 sites, some dating as far back at 3,000 B.C. Among the sites she located:

In her latest study, Parcak tested several different types of satellite imagery to determine which ones are most effective in locating tells under various environmental conditions. It’s the first step toward the general use of satellite remote sensing in Egyptology. Her findings appear in this month’s issue of the Journal of Field Archaeology, which is not out yet. But this press release seems informative,

Images captured from space pinpoint telltale signs of previous habitation in the swatch of land 200 miles south of Cairo, which digging recently confirmed as an ancient settlement dating from about 400 A.D…

“It is the biggest site discovered so far,” said project leader Sarah Parcak of the University of Alabama at Birmingham. “Based on the coins and pottery we found, it appears to be a massive regional center that traded with Greece, Turkey and Libya.”

Another large city dating to 600 B.C. and a monastery from 400 A.D. are some of the four hundred or so sites that Parcak has located during her work with the satellites. The oldest dates back over 5,000 years.

Egypt contains a wealth of already identified archaeological tells like these, but even they represent only about 0.01 percent of what is out there still uncovered, Parcak said.
“There are thousands of settlements that Egyptians don’t even know are there,” Parcak told LiveScience…

“Basically, I’m trying to distinguish the ancient remains from the modern landscape,” she said. “A site is going to appear very differently from space.” Archaeological sites absorb moisture in a different way, she explained, and tend to be covered with specific types of soil and vegetation.”

Since I am a technology buff, I highly advocate using these emerging technologies and methodologies to find new archaeological sites. Anyone can download a free copy of Google Earth and begin to survey the Earth for archaeological sites — you’ll know when you see something.

Chances are you’ll find something that hasn’t been found yet. And the more eyes we have on the look out for sites the more chance there is that these valuable assets can be protected and researched. But on the flip side of that is that these technologies also bring sometimes unwanted exposure to archaeological sites — by that I mean looters and vandals that end up destroying cultural heritage and removing artifacts.