Okay, so I’ve got kinda sorta a good news/bad news situation. The good news, more informative news is coming out about the big fossil tooth study that I shared with’ya last night. National Geographic is covering it better than anyone else, so until the publication comes out (tomorrow, hopefully — and that’s the bad news), all we got is what they have to share.

First and foremost, the sample size of this study is pretty remarkable. 5,000 teeth were studied. 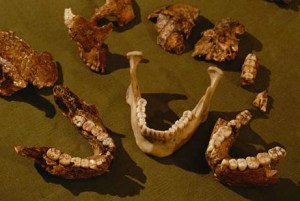 The analysis started way back from 2 mya Australopithecines to modern Homo and each tooth was scrutinized to over 50 different measurements and observations.

Paraphrased from National Geographic, what they found is that European teeth were more similar to Asian teeth than they were to African teeth. They conclude that Europe’s first early human colonizers were from Asia, not Africa. I’ve asked this before, why teeth? I’ll answer it again, the shape of the teeth offered clues about each species’ genetic lineages because teeth change shape very little once they are formed, and their shape is strongly influenced by genetics.

“This finding does not necessarily imply that there was not genetic flow between continents… Just because people had come out of Africa didn’t mean that they couldn’t turn around and go back again.”

I think a much more safe conclusion to make is that it appears as if the current fossil record of hominid teeth is showing us that human ancestors spread in many directions before arriving in Europe. I wonder if and how does the genetic, archaeological, and linguistic evidence supplement this?

Here is a set of some of the human evolution publications that Martinón-Torres has been a part of:

10 thoughts on “Were the first Europeans fom Asia?”