I don’t know how reputable this is, but it is concerning news. The Great Wall of China could be gone in 20 years. The photograph included in this news report is alarming to say the least.

Local archaeologist say that sandstorms in northern China are eroding large sections of the Wall into rubble, 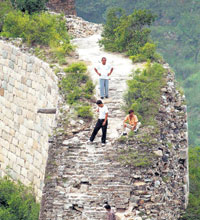 “About 310 miles from the Jiayuguan Pass lies Minqin county, where 37 miles of the wall is disappearing rapidly, a victim of extensive farming since the 1950s, which has sapped underground water and destroyed the
local ecology.

“This section of Great Wall was made of mud rather than brick and stone, so is more prone to erosion,” Zhou Shengrui, a former curator of the local museum, told the Xinhua news agency. “Similar erosion happened in other places, but the situation is worse here.

Frequent storms not only eroded the mud, but also cracked the Wall and caused it to collapse or break down.””