Tommorrow, Nature will be publishing a new study of the Dmanisi fossil specimens. In preparation, I’m gonna introduce you to the importance of the Dmanisi site, overview the human fossils that have come out of it, and the related debates.

Firstly, Dmanisi is a rich paleoanthropological and archaeological site in Georgia. Multiple lines of evidence date the human occupation at Dmanisi as early as 1.85 million years ago, putting it in the Pleistocene. You ask, “What sort of data?” Layers of ash and sandy sediment, which contain remains along with numerous crude stone tools and flakes, have been dated radiometrically at 1.7 to 1.85 million years old.

Other dating techniques, such as isotopic potassium-argon (K-Ar) and argon-argon (40Ar/39Ar) dating give an age of 1.8 million years ago. Paleomagnetic analysis of the units around the fossil layer, hold a record of change in magnetic polarity about 1.77 million year ago, which correlates to other dated sites, most notably Olduvai Gorge in Tanzania. All of these dating techniques help place Dmanisi as one of the most ancient human habitation sites in Eurasia. Dmanisi is approximately equivalent in age to the oldest H. erectus localities in eastern Africa. The remains found from Dmanisi have become crucial, and at the same time very controversial, to the study of human evolution.

The remains I want to segue into have consistently brought up a heated debate. And since we’re talking early Pleistocene, i.e. 1.8 mya, we are in the Homo lineage. For anyone not in the know, the fossils record for early Homo is spotty. Trying to make sense of the spottiness, many anthropologists have been butting heads about what has been happening to Homo erectus and Homo habilis during a 2 to 1 million year ago time frame. John Hawks reviewed Brown’s revised chronology in 2006. And the most recent debate, the Ilert hominids, have complicated our understandings of what was going with these two taxa in Africa. So to say that H. erectus has a problematical heritage is to grossly simplify matters.

The best Dmanisi fossils from this time frame haven’t, as of yet, clarified the conundrum outside of Africa for us. The first hominid fossil from Dmanisi was a mandible, was found on the last day of the 1991 field season, by Antje Justus. This mandible was assigned as D211.

While the H. erectus versus H. ergaster debate is largely settled in favor of calling everything that was once ergaster synonymous with erectus, at the time, D211 opened a Pandora’s box of sorts because it differs from known H. erectus specimens. D211 has certain similarities to

ER992 (pictured) and ER730, both assigned as H. ergaster from Africa. D211 shares the following similarities:

D211 differs from ER992 and ER730 because it has smaller molars and premolars as well as a less receding anterior surface of symphysis. Despite these differences in size, and Brauer and Schulz’s contention that D211 is a representative of H. erectus, D211 was placed closer to H. ergaster group.

Even though the debate over classifying D211 was between calling it H. ergaster and H. erectus, and not H. habilis vs. H. erectus, it did set the tone for agreeing about future hominid finds from Dmanisi.

Fast forward to 1999, when D2280 and D2282 surfaced from the same stratigraphic level as D221. D2280 is an almost complete calvaria. It includes most of the left mandibular fossa of the temporal, a partial cranial base with a damaged occipital, and parts of the greater wing of the sphenoid. It is pictured in the photographs to your right.

You can see it is rounded, and doesn’t have such an angular posterior side, traits seen in H. habilis. The endocranial volume for D2280 is about 775 cm3, making it small… closer to the size of H. habilis than H. erectus. But because D2280 included a supraorbital torus, and shared some proportional similarities to H. ergaster (like WT15000 and ER3733), it was assigned as such.

D2282 is a much more complete specimen. As you can see, it is a cranium with many of the bones of the face and cranial vault. The major problem with D2282 is that it has been kinda deformed throughout the ages, the occipital and temporal ares are crushed on the left side, as are the zygomatic bones making a lot of the measurements and proportions convoluted.

To complicate it, much of the median upper facial skeleton is missing including the supraorbital torus at glabella, nasal bones, and frontal processes of the maxillae. Which makes it even harder to compare feature to feature to D2280.

However, all hope was not lost with our friend D2280. With a well persevered maxillae that still holds the right P4-M2 and the left M1 and M2, as well as the alveoli of all other adult teeth including those of M3, a more thorough comparison was done. 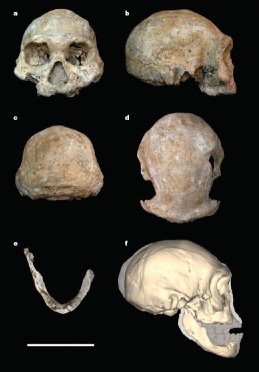 The comparison of the teeth lead to the conclusion that D2282 represents H. erectus. One example, the presence of singler roots in the upper premolar teeth is a H. erectus trait that.

The cool thing about D3444 cranium is that he was an old guy, completely toothless. His toothlessness was not something new, he had been toothless for several years before death, judging by the complete resorption of the tooth sockets. The implications of how he was cared for in his old age, were outstanding.

“In overall shape, D2700 is similar to D2280 and D2282, and D2735 resembles D211. Despite certain differences among these Dmanisi individuals, we do not see sufficient grounds for assigning them to more than one hominid taxon. We view the new specimen as a member of the same population as the other fossils, and we here assign the new skull provisionally to Homo erectus.”

So, other than showing you how bountiful Dmanisi has been in yielding Homo fossils, what else is going on here? We have a lot of small habilis-like skulls coming out from Dmanisi which have erectus-like features.

Do we go with size or do we go with morphology? As of right now, we’ve gone with morphology, but that’s problematic, especially dealing with heavily fragmented remains. Better yet, do the Dmanisi fossils represent a transitional species, one were humans were similar in size to habilis but similar in shape and form to erectus?

I think that will be answered in tomorrow’s Nature.

I don’t know really, but I’d like that to be answered because I’m pretty sure all you see right now is the great flaw in understanding evolutionary relationships and ancestors from fossil remains; when determining taxonomies with many traits, measurements, and damages to consider, it seems to be nothing more than a big pissing match between respective paleoanthropological groups.