In an upcoming publication in the Journal of Human Evolution will be an interesting study that should get all y’all dental anthropology buffs excited. It comes from Max Planck Institute for Evolutionary Anthropology and the European Synchrotron Radiation Facility. 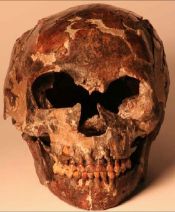 The study will use synchrotron microtomography, a form of visualization that was developed bypaleontologist Paul Tafforeau.

Like computed tomography, a technique we saw used in the analysis of the Chorapithecus teeth, synchrotron microtomography uses x-rays to create cross-sections of a 3D-object that can be used to recreate a virtual model without destroying the original model. The team is applying this technique to able to see inside the teeth of humans and Neandertals to reveal tiny daily growth lines without any damage to these invaluable fossils. They’re doing it in hopes of resolving the long-standing debate over developmental differences between Neanderthals and our Homo sapiens.

They are specifically analyzing the two Neandertals from Le Moustier and Krapina against to early Homo sapiens from Qafzeh and Jebel Irhoud. It should be a really interesting study.

One thought on “Synchrotron Microtomography Analysis of Human vs. Neanderthal Tooth Development”