Somewhere in PNAS‘ list of upcoming publications will be a study on the jade trade, specifically an analysis of nephrite jade pieces dating back to 3000 B.C. from Asia.

The study was lead by Hsiao-Chun Hung of the Australian National University. These guys sampled ear pendants spanning around 1,000 years. 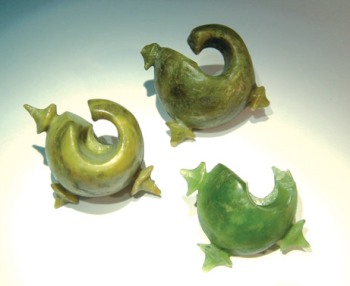 These earrings were from around the South China Sea: coastal Cambodia and Vietnam, peninsular Thailand, western Philippines, southern Taiwan and Sarawak in Borneo.

Doing some structural and chemical analysis on the mineral composition, the researchers found that most of these earrings were made of jade from one location in eastern Taiwan, Fengtian. They suggest that the jade was distributed as blanks and that itinerant craftsmen may have traveled among the coastal lands, fashioning these decorative pendants for wealthy locals. I don’t know how they know that because the image to the right of earrings for Vietnam and the Phillipines have a remarkably similar style, indicating they may have originated from one source culture.

However the items were made, their distribution from one source across hundreds of miles of ocean represents an extensive trading networks of a single mineral among ancient peoples. It is only rivaled by the stone adzes, I described several months ago.

One thought on “The Jade Trade”