The report published in Nature by Whitcome, Shapiro, and Lieberman reports on a longitudinal study of 19 pregnant women to show how the center of gravity moves forward as the pregnancy progresses and also identifies male/female differences in lumbar curvature or lordosis. 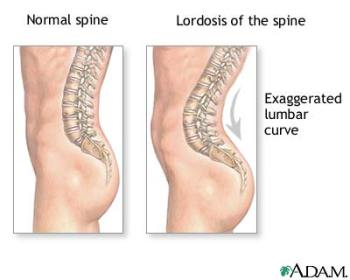 They make the point that this assembles into a neat evolutionary adaptationist story – females have more lumbar lordosis than males (sexual dimorphism) and this appears to be helpful for the unique demands of a pregnant upright biped. Katherine Whitcome is a research fellow, Liza Shapiro is a very experienced specialist in primate spinal evolution, and Daniel Lieberman has been very much involved in understanding the importance of long distance walking in human evolution.

The article doesn’t mention that there are numerous other reports about sexual dimorphism in the human lumbar lordosis – about half of the studies found no statistical difference between males and females and the other half found a small difference. All of these are referenced and updated in a recent article titled, “Radiographic Analysis of the Sagittal Alignment and Balance of the Spine in Asymptomatic Subject” by Vialle and colleagues (Journal of Bone and Joint Surgery Am. 2005, 87:260-7). Hence the idea of sexual difference here is not new and although the wedging measure used by Whitcome et al produced a statistically significant difference, it is not clear the wedgeing of bones equals real differences in lordosis and it is not clear that the sexual difference will hold up in larger studies. They don’t tell us why the other studies showed no sexual difference.

Nonetheless, the story makes the same point I have made in my books, Axial Character Seriation in Mammals and The Upright Ape: A New origin of the Species, as well as and in two recent articles – one on the evolutionary origins of back pain – in which I discuss the evolution of lordosis in the online journal Neurosurgical Focus, and the other, my article in the online journal PLoS ONE.

Most mammals have a lumbar spine whose architecture tends to passively resist the force of gravity when positioned in a horizontal or diagonal position. In humans and such ancestors as Morotopithecus, however, the spine mechanics are reversed so that quadrupedal stances are very tough on the spine. Only fully upright stance is comfortable. In the Neurosurgical Focus article, I also point out that the backward projection of the hip bone – the iliac crest (or more specifically the ‘posterior superior iliac spine’) gradually moves farther and farther posteriorly so that the back muscles can resist the weight of young carried in front. This provides another basis for understanding the time of onset of the lordosis. However, in the Neurosurgical Focus article, I also show how the conversion of the longissimus muscle attachment onto the lumbar transverse process would have been sufficient to allow for carrying infants in the Morotopithecus configuration as far back as 21.6 million years ago.

These findings further support the point that position that bipedal walking – full time bipedalism – may be very ancient in the hominoids. It also may explain why various hominoid lineages such as those leading to modern orangutans, chimps and gorillas abandoned upright bipedalism in favor of a re-engineered lumbar spine that could better resist the weight of the late term fetus during long distance travel in horizontal quadrupedal and diagonal postures.

5 thoughts on “Evolution of Lordosis and Pregnancy”