A week ago, I shared with you news of Bill Jungers’ conclusions on how the morphology of the Homo floresiensis foot affected its locomotion. Science has dedicated a short two page ditty on this topic and you may wanna check it out for a more authoritative take on it.

In other related Homo floresiensis news, John Hawks was contacted by Peter Brown who wanted to share his response to the claims that the LB1 specimen showed signs of recent dental work. I didn’t share this news, which first really emerged in Kate Wong’s Scientific American blog post, because I felt it was as absurd as the analysis done by Obendorf et al. last month.

The news really emerged from Maciej Henneberg proposition that the mandible of LB1 appears to have a filling, possibly a root canal, in its lower left first molar. This was all based off of a photograph and that would indicate it is a modern human. We all know from Obendorf et al.‘s research how flawed it is to analyze a photograph or screen capture.

Peter Brown supplied a relatively high resolution of the LB1 mandible and I can’t see any indication for a filling on the occlusal surface of any of the teeth, let alone the first molar on the left side. 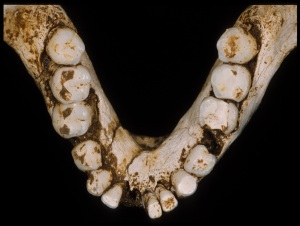 Furthermore, CT scans of the jaw show no modification either. So, its a dead end line of inquiry. Simple as that.