There’s a new PLoS ONE paper making the rounds in the press today. The research behind it fits the kinda stuff you may see on Dienekes’ Anthropology Blog and sometimes on GNXP… it is basically an investigation on the attractiveness of a symmetrical face. The paper is published open access, under the title, “Symmetry Is Related to Sexual Dimorphism in Faces: Data Across Culture and Species.” It comes from psychologists and anthropologists in the U.K. and the U.S.

This subject is extremely interesting. The face has many functions in social behavior — moods are assessed from emotions expressed on the face. The face also functions as a billboard, advertising the quality of the mate. More attractive faces are often thought to be higher quality mates. Both symmetry and degree of sexual dimorphism have been linked to affect the attractiveness of human face shape.

In this study, subjects were given arrays of photos of 500 faces from people of European and African ethnicity as well as photos of non-human primates (macaques). About a third of the faces were male and the rest were females. The subjects were asked to judge for the most attractive face. The most attractive faces were then measured for symmetry. Symmetry was determined by measuring deviations from the midline, as well as measurements for the distance between the eyes. In total 6 measurements were made to assess bilateral symmetry.

The degree of sexual dimorphism was also measured. The distance between specific points, like the prominence of the cheekbone and ratios of the height of the jaw to the lower face height, lower face height to the face height and ratio of the width of the face to the height of the lower face were made. In all samples, symmetric males were ones who also had more masculine facial proportions and symmetric females had more feminine facial proportions. I’ve put up a figure that shows the highs and lows of attractive faces form their study. 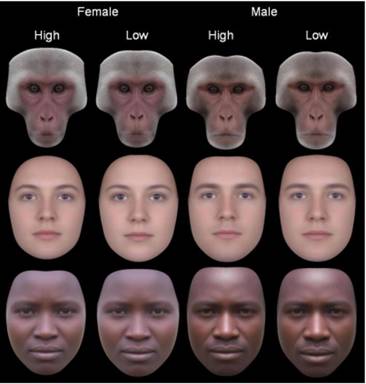 These conclusions further validate the notion that sexual dimorphism and symmetry in faces advertise mate quality. I kinda have an issue with how the authors are phrasing their results — they had two ethnic groups in their study but conclude that symmetry & dimorphism is attractive in all cultures. It is very probably that other cultures also share this sentiment, but it is over-stretching the results to say that this reaction is evident ALL cultures and species based off of two ethnic groups.

I’m also not too sure how the authors justify that sexual dimorphism and symmetry in the face provides evidence that there must be a biological mechanism linking the two traits during development. This could be because I really don’t know much about evolutionary psychology. There is without a doubt something going on psychologically that makes people associate symmetry and dimorphic faces as attractive, how that translates to mate quality is highly debatable. On a related sidenote, I find the data about our ability to find attractive primate faces also very interesting, the authors suggest that,

“the signaling properties of faces are universal across human populations and are potentially phylogenetically old in primates.”

Which indicates that there’s been some sort of selection in the primate lineage that has predisposed us to associate symmetrical, dimorphic faces as attractive.