A couple days ago Science published a peopling of the Americas paper. The paper is based on ancient mtDNA analysis of hair from a site in Greenland called, Saqqaq, also known as Qeqertasussuk, Disko Bay. The authors were able to identify a unique haplogroup, not shared by other Native Americans, which suggests that a different group from north Asia settled in what is now Greenland and then disappeared.

The paper is titled, “Paleo-Eskimo mtDNA Genome Reveals Matrilineal Discontinuity in Greenland.” The twigs associated with the site were dated by Carbon-14 to be roughly 4,000 – 3,100 years old. Four human long bones were excavated but were in poor condition. A clump of permafrost-preserved hair was also excavated. While hair is mostly made up of keratin protein polymers, the shaft of hair follicles often are an abundant source of well-preserved ancient DNA. 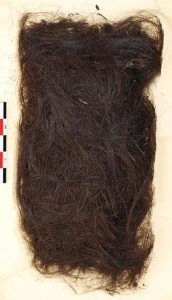 The authors first honed in on this, first PCR amplifying, cloning and sequencing just the mtDNA HVS1 sequences. It was found that the hair derives from a single clade, Hg D2. D2 is shared with Aleuts of the Commander Islands as well as Sireniki, Yuit, Chukchi, Buryat, Khamnigan, Yakut, and Evenk peoples. Hg D2 is not found in any European and Inuit populations, and that determined that there was no contamination from the excavators.

Unlike the other ancient DNA paper we heard about earlier this week, the authors of this paper decided to sequence the complete ancient human mtDNA genome. The FLX sequencing-by-synthesis developed by 454 Life Sciences and Roche Diagnostics was used primarily, as well as traditional pyrosequencing for shorter segments. The genome was sequenced approximately 11 times over and approximately 16,497 bp of the 16,569 base pairs genome was assembled. All of the Hg-diagnostic SNPs they found in their first pass, the HSV 1 trial, were re-confirmed, further validating no contamination.

Comparing the Saqqaq genome to the Cambridge Reference Sequence indicated the Saqqaq differs at 40 SNPs. At these 40 SNPs, no detectable contamination or mosaic sequence variation was found. Comparing this nearly complete mtDNA genome to 300 complete Native American mtDNA genome sequences indicates that the Saqqaq sample is distinctly different from modern and ancient Neo-Eskimo people. From the paper,

“The sample is closely related to D2a1a, a common mtDNA haplogroup found among Aleuts, in particular those of the Commander Islands, who are descendants of a forced colonization of the Medny and Bering Islands in the mid 19th century. The sample is also closely related to a subset of the Siberian Sireniki Yuit. However, the Saqqaq sequence is unique, and does not share specific mutations with these groups (n.p. 8,910 for D2a1a and n.p.16111-16366 for D2a1b) but rather branches off of the root of D2a1 on the basis of two homoplasmic (n.p.14226-16092) and the putatively heteroplasmic (n.p.11234) private mutations.

Based on the contemporary Sireniki Yuit and Aleutian mtDNA data, the coalescence of the D2a1 clade was estimated to 2,000±3,400 years using the synonymous transition clock (23) or 7,500±4,500 years when the clock is calibrated over all coding region sites.”

This cladogram provided in the original paper documents the differences much better: 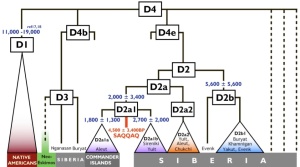 The observation that ‘Hg D2 derives from an Asian specific Hg D4e and not from any of the 5 Native American founding haplogroups,’ indicates to the authors that migrations that first lead human populations to colonize the far North of the New World all the way to Greenland first. This is not a crazy claim, we now know there were multiple migrations into the Americas and the current mitochondrial diversity of Native Americans indicates very few ancestral mothers, but with this new study we now know the diversity of Native Americans was at least diverse in at least one more lineage.