So that poll I asked y’all to take last week has been closed. As promised, I want to share the results. Even though almost 1,000 viewers checked the post out, I didn’t get nearly as many responses as I hoped for. Still, there is some useful data… 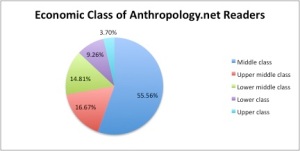 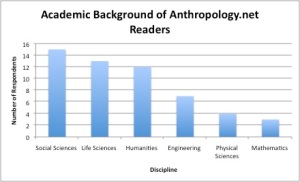 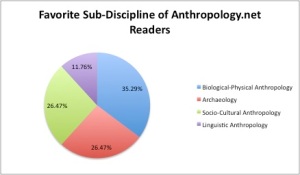 Based upon the 55 people that did take the poll, we have a much different demographic than what the Facebook fan page shows. I’ve been thinking about why that is so. It could be that Facebook fans are just that, fans, and not regular readers and contributors to the site.

I’m most surprised by the disproportionate distribution of males and females. I anticipated at least a 50:50 male to female ratio, because Facebook fan page mentions that at least 60% of Anthropology.net fans are female, but I guess a lot more guys read this site. I did notice that an outstanding majority of Facebook fans of Anthropology.net are females from Turkey — and could have thrown off the demographics there. The language barrier could be a reason as why they aren’t represented in the poll.

I kinda had an idea the majority of the readers are those with at least a Bachelor’s degree, but I am surprised the site reaches a different age demographic than I what I had in mind. One last observation, I think there’s something interesting going on with the majority interest in bio-physical anthropology compared to the predominate background in the social sciences. Of course this is by no means statistically significant data, we don’t really have enough respondents to even establish a normal distribution. Hopefully next year we’ll have more data.

6 thoughts on “A Demographic Breakdown of Anthropology.net Readers”