The open access journal PLoS One has published a new ancient DNA paper, “A 28,000 Years Old Cro-Magnon mtDNA Sequence Differs from All Potentially Contaminating Modern Sequences.” One which establishes, yet again, that the Neandertal mitochondrial hypervariable region I is much different from modern humans. This was done by extracting mtDNA from the Paglicci 23 specimen, understood to be a Cro-Magnon individual.

Paglicci 23 was discovered by Francesco Mallegni, one of the authors of the current paper, in 2003 from the Paglicci Cave site.

I think the Paglicci Cave site is currently the earliest Aurignacian-Gravettian site in Italy — dating to be 34,000 years old. Anyone know for sure?

Either way, the Paglicci 23 and is represented by a tibia, skulls, jaw and maxilla. Radiocarbon dating indicates the remains are 28,100 years old. It was not excavated nor handled in sterile conditions. It was washed and analyzed by seven people since then, raising the possibility of contamination from modern human DNA. 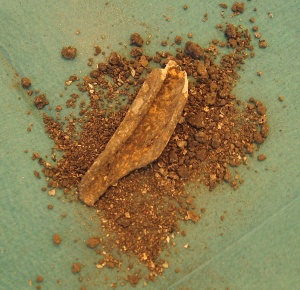 In 2005, a piece of the tibia and two pieces of the skull were moved to a DNA lab at the University of Florence, where DNA was extracted, the hypervariable region I of the mtDNA amplified and sequenced. It should be noted that the bone was washed with bleach and irradiated with UV light and mtDNA was isolated from tissue inside the bone — not directly handled by people. The mtDNA of the people who handled the remains was also isolated and sequenced. This was done to see if their DNA contaminated the sample, since the remains weren’t handled under sterile conditions.

This procedure was repeated in another laboratory, by Carles Lalueza Fox in Barcelona, using a tibia fragment. Carles Lalueza Fox is a big name in ancient DNA studies, one of the guys who sequenced FOXP2 from Neandertal remains. Oh also, using Neandertal specific primers for the PCR, yielded no results — indicating that the remains were modern human… but more on that later.

Anne Holden blogger at 23andMe, who says she specializes in science writing, hails this paper in providing a “novel way,” of identifying contamination —

“by analyzing the DNA of everyone who touched a fossil for comparison in order to rule out contamination.”

She’s mistaken. What Caramelli et al. have done in this paper is hardly novel. I covered news of a May, 2008 paper in Science which isolated and extract mtDNA from 4,000 year old hair from Greenland. The hair was also not excavated under sterile conditions. In that paper, the DNA of everyone who handled the sample was also screen and compared to the sample in order to rule out contamination. And that’s just one example of preventative measures in sequencing ancient DNA that immediately comes to mind.

Anyways, the relationship between the Paglicci 23 sequence and all the sequences from the seven individuals who touched the specimen was investigated. In addition, the sequences were compared against other Cro-Magnon and Neandertal sequences. They had some problems which were resolved by treating the DNA extract was treated with Uracyl-N-Glycosidase (UNG). The authors conclude that,

“the Paglicci 23 individual carried a mtDNA sequence that is still common in Europe, and which radically differs from those of the almost contemporary Neandertals, demonstrating a genealogical continuity across 28,000 years, from Cro-Magnoid to modern Europeans.”

In fact, they write,

“we concluded that the sequence obtained from the Paglicci 23 specimen is the CRS.”

The press is saying that the results are first ever demonstration ‘that the anatomical differences between Neandertals and Cro-Magnoids were associated with clear genetic differences.’ That’s overshooting the analysis. There are clear differences in the mitochondrial genome of Neandertals and Homo sapiens, and this is not the first paper to document it. And all this shows is that the Neandertals are not the ancestors of modern Europeans.

10 thoughts on “The 28,000 Year Old Paglicci 23 Cro-Magnon mtDNA Ain’t Neandertal — It Is More Modern Than Anything Else”