Okay, I got some really cool archaeology news to share with you. In fact it is so cool that I’m staying up to write up my review. Before I get into it, let me first introduce some relative background you’ll need to understand.

One of the most important predecessors to the Inca Empire were the Tiwanaku, a pre-Columbian culture that expanded from a home base on the south eastern edge of Lake Titicac, Bolivia to what is now southern Peru and northern Chile. The expansion happened between 1,500 years ago to 1,000 years ago and is commonly referred to as the Middle Horizon of Andean prehistory.

The Tiwanaku perfected a type of agriculture which raised crops from the ground. Lowered canals innervated the mound-like crops, and during the day, the crops absorbed water and canals absorbed solar radiation. During chilly nights, the heat radiated into the soil, preventing crops from freezing. The warmed canals also served a secondary function: providing a water source to farm edible fish.

Aside from their unique achievements in agriculture, the Tiwanaku also had an equally curious architectural style, employing massive ashlar blocks sometimes as heavy as 130 tons quarried 40km away. They built temples and platforms as large as 200 meters on each side and 15 meters tall. According to some hand-me-down stories, myths passed down to the Incas and then to the Spanish, these buildings served as spiritual centers. Fittingly, structures like the Gateway of the Sun have representations of their main deity, Viracocha. Other statues represent other deities, sometimes even abstract representations of a calendar and religious purposes. 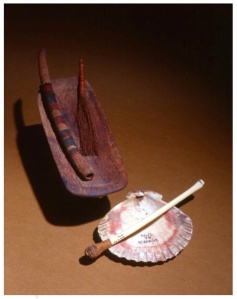 An Example of a Tiwanakuan Snuff Kit

Tiwanaku burials continue this spiritual motif. Many mummies and skeletons from this culture also include tablets and snuff kits documenting the use of psychoactive drugs perhaps in a spiritual afterlife ritual or shamanistic tradition. In fact an archaeologist reported 614 snuffing kits recovered from an excavation, which suggests that the Tiwanaku were possibly using hallucinogenic materials. Previous chemical analysis of the kits indicated that they once held Vilca  (Anadenanthera colubrina), a plant rich in hallucinogenic tryptaminic alkaloids. Ethnographers have documented consumption of Vilca or hatáj by Wichi shamans. CAT scans of Tiwanakuan skulls have shown signs of chronic perinasal damage in some cases, likely caused by frequent sniffing of Anadenanthera. But we haven’t, as of yet, proven that the Tiwanaku consumed these drugs.

And here’s where a new paper in the Journal of Archaeological Science comes thru. The paper, “Identification of psychoactive alkaloids in ancient Andean human hair by Gas Chromatography/Mass Spectrometry ,” involves an analysis of the chemical composition of hairs from 32 mummies from northern Chile, dating to the Tiwanakuan expansion. The hairs were removed then cleaned and alkaloids were extracted from them. The alkaloids were loaded in a gas chromatographer, a device that separates molecules into compounds based upon how they move about through a stationary phase. Every compound has a specific retention time in the stationary phase, which ultimately is detected by a scaled down mass spectrometer. The mass spec gives a mass to charge ratio for every compound and this is all assembled to build the unique chemical fingerprint of a molecule.

The authors’ methodology seems sound. They duplicated some trials if they had extra material, even did triplicates when they had a lot more hair lying around. They also calculated the lowest detectable amount of alkaloid, just to determine the limits of accuracy. And for one more precautionary move, they also looked at modern day samples as well, to see if there’s something in the air or water that’s being inadvertently absorbed.

They specifically looked to find fingerprints of harmine and 5-methoxy-N,N-dimethyltryptamine. I don’t know what 5-methoxy-N,N-dimethyltryptamine does. It is found in Anadenanthera colubrina, so I assume it is a psychoactive drug… If any pharmacologists, physicians, chemists, neurologists, etc. out there know its affects please let me know in the comments below. But I do know what harmine does. It ultimately inhibits the break down of neurotransmitters, like serotonin and dopamine, giving the consumer more prolonged effects of abundant neurostimulus.

The results suggest that none of the mummies tested positive for 5-methoxy-N,N-dimethyltryptamine alkaloid, which is highly controversial considering lots of snuffing kits test positive for this chemical. The results also showed that two of the mummies tested positive for harmine. The first harmine using individual was buried with drug paraphernalia, but did not have lesions. In fact he has a snuffing tablet, one four points hat and the remainders of another one, and several pan pipes. The hat indicates the individual was of significant social prestige. CAT scans of his skull show that he had sclerotic lesion in the perinasal area — perhaps a chronic sniffer. The other individual was a 1 year old infant, buried with also with tablet and a four points Tiwanaku hat. It is highly unlikely that we had a 1 year old drug addict — but perhaps drug consumption was part of the ceremonial processes either during the life of this child or immediately after?

Since only 2 of 32 individuals showed evidence of drug usage, the authors were cautious to say drug consumption was rampant, but they did provide direct and conclusive evidence of consumption of psychoactive substances. Furthermore, the Banisteriopsis vine is the only South American species studied that contains harmine. The vine is found only in Amazon basin, far away from the Azapa valley indicating the possibility of a vast trade network of Tiwanaku. Ultimately, I commend the authors for successfully providing the first direct archaeological evidence for the consumption of hallucinogenic herbs.

10 thoughts on “Consumption Of Psychoactive Drugs By Tiwanakuan Mummies”