There’s a very interesting new paper, through which prospective readers are free to roam and explore at will, by Alfonso Arribas et al, in which the site of Fonelas, Granada in southern Spain is described, where excavations have revealed that around 1.8 million years 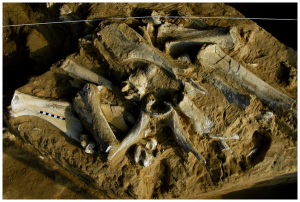 ago, a vast suite of mammalian fauna from Asia, Europe and Africa congregated, affording us a unique glimpse into a previously hidden corner of the world at a time when the first hominids are thought to have made their appearance on the European stage. Moreover, these findings will prompt a great deal of thought as to how and why large mammals from such discrete and distant geographical locations came to occupy an area known today as the Guadix Basin, part of the Betic Cordillera. By way of a more formal introduction, here’s the abstract:

Over the last decades, there has been an increasing interest on the chronology, distribution and mammal taxonomy (including hominins) related with the faunal turnovers that took place around the Pliocene-Pleistocene transition [ca. 1.8 mega-annum (Ma)] in Europe. However, these turnovers are not fully understood due to: the precarious nature of the period’s fossil record; the “non-coexistence” in this record of many of the species involved; and the enormous geographical area encompassed. This palaeontological information gap can now be in part bridged with data from the Fonelas P-1 site (Granada, Spain), whose faunal composition and late Upper Pliocene date shed light on some of the problems concerning the timing and geography of the dispersals.

This rich fossil site yielded 32 species of mammals, among which autochthonous species of the European Upper Villafranchian coexist with canids (Canis), ovibovines (Praeovibos) and giraffids (Mitilanotherium) from Asia. Typical African species, such as the brown hyena (Hyaena brunnea) and the bush pig (Potamochoerus) are also present.

This assemblage is taxonomically and palaeobiogeographically unique, and suggests that fewer dispersal events than was previously thought (possibly only one close to 2.0 Ma) are responsible for the changes seen around 1.9–1.7 Ma ago in the fauna of the two continents.

The site at Fonelas itself has been described previously in 2006, (PDF), and this paper follows on from research published in 2007, reported at this very site, the BBC and elsewhere, whilst there is even a dedicated website, in Spanish, and the sheer number and density of the fossils found are in large part due to the scavenging activities of ancient hyena. However to bring us up to date, here’s another brief snippet from the opening paragraphs:

Lying within the western extreme of the Palaearctic, the Iberian Peninsula is known for palaeoenvironmental sites with evolutionary implications of paramount importance. Over long periods of geological time, this has been a land of transitions and physiographical heterogeneity, including the possible existence of islands in the Straits of Gibraltar (enabling exchanges with the African continent). Conceivably, throughout the Cenozoic, climatically influenced species turnover, invasions, and competitive exclusion combined with species survival produced unique associations of plant and animal species. Here, we report on the chronology and composition of the late Upper Pliocene Fonelas P-1 fossil assemblage. Analogous assemblages have not been documented in Eurasia and no other findings have been recovered in the Quaternary. This truly is a large mammal “Lost World”.

The finds seem to mostly date from 1.8 million years, a date traditionally ascribed to the Pliocene/Pleistocene boundary, also known as the Quaternary, (preceded by the Neogene) but as was reported recently, this boundary which describes the onset of global cooling which ushered in a series of intense glaciation episodes, has recently been officially re-dated some 800,000 years beforehand to 2.6 mya. This is because it was felt that the earlier date more accurately reflects the time when global cooling commenced, and moreover is opined to be of greater significance in the geological record.

The paper itself offers a graphic description of the site itself, of which only a tiny portion has thus far been excavated, and includes details of the various mammals which made their way to the Iberian peninsular,  in what the researchers believe was a single migration event. Of particular interest is how some of these mammals made their way from Africa, and owing to a lack of finds along the Levantine, they propose that the Strait of Gibraltar may have been a crossing point between the African and European continents.

Although there is speculation that island once existed there that would have allowed for such a crossing, there is no evidence that I could find in the geological record that any such islands existed  – presumably the mammals, including early Homo, would have swum between each of these putative islands, some heading north into Europe, others heading south into Africa, in a faunal (and floral) exchange.

It occurred to me that there may have been episodic freezing of the Strait, which would allow for a much neater and tidier fit than transient islands, or even a land bridge which would have had to be in existence long after the Messinian salinity crisis around 5.9 million years ago, the last time that the flow of water into and out of the Med from the Atlantic had been blocked. The result was that the Med evaporated in around 1,000 years, with the possible exception of a few briny lakes scattered across the abyssal floor.

However, the sheer volume of water flowing through the Strait in both directions would seem to dictate that the Strait would not have frozen, even on a more contrasted seasonal basis,  around the time of the glaciation in Europe around 1.8 million years ago – something would have needed to temporarily switch off the Atlantic current, whose reduced salinity would have been more prone to freezing. But these strong currents would also have been a major problem for terrestrial mammals attempting the crossing, with or without islands dotted here and there, and would therefore have presented a formidable obstacle.

However, I can find no evidence that even hints at the Strait freezing over at that time, or indeed ever, and although it might be possible that a very brief episode of (seasonal) freezing lasting only decades occurred around 1.8 mya, there might be no clues in the geologic records that could confirm or deny this. The southerly latitude of the Strait is far from the Alpine glaciation which occurred further north in Europe, and even in the recent glaciation, it is thought that icebergs were found no further south than the Bay of Biscay, which again would seem to argue against the southern Iberian peninsular being cold enough to freeze its coastal waters.

If there had been islands or a land bridge at the time, the flow of water from the Atlantic could have been severely restricted, possibly to the extent that sea levels in the Med would have fallen, as the outflow of rivers around the Med Basin isn’t enough to keep it topped up. But a thin ice sheet across the Strait of Gibraltar may have allowed enough water from the Atlantic to continue flowing into the Med without compromising the depth therein – allowing for this mysterious exchange of flora and fauna which later inhabited the ‘lost world’ of the Guadix Basin.

There’s plenty more in this paper worth checking out, most notably about how the dating was established, and the details of the impressive number of remains discovered, and it seems likely that future seasons of digging  and analysis will offer an even greater volume of data and further establish the Iberian peninsular as a unique location for establishing its importance in the search for ever clearer insights into the first archaic humans residents of Europe and the vast suite of mammalian fauna with whom they co-habited.