There’s been some coverage of a recent announcement by Svante Pääbo of the Max Planck Institute, who opines that Neanderthals and 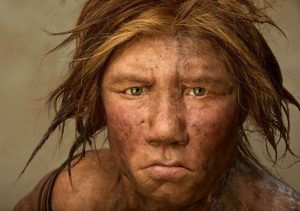 anatomically modern humans had sexual encounters as they co-habited in Upper Palaeolithic Eurasia from around 42,000 bp to 24,500 bp. The main article is over at the London Times, from which this is an excerpt:

Paabo recently told a conference at the Cold Spring Harbor Laboratory near New York that he was now sure the two species had had sex — but a question remained about how “productive” it had been.  “What I’m really interested in is, did we have children back then and did those children contribute to our variation today?” he said.

“I’m sure that they had sex, but did it give offspring that contributed to us? We will be able to answer quite rigorously with the new [Neanderthal genome] sequence.”  Such an answer might ease the controversy over recent contradictory discoveries regarding Neanderthals. Some fossils seem to have both modern human and Neanderthal features, suggesting that the two species interbred. Yet DNA scans have shown that Neanderthal genes were very different from those of modern man.

Pääbo is reported to be at the point of publishing his analysis of the Neanderthal genome, and it seems clear that he has gleaned something from the data that has prompted this latest assertion; previous research has been interpreted as indicating that if the two species did interbreed it was at a very low level, apparently evidenced by the almost complete lack of a Neanderthal presence in our own genome today.

The way Paabo is couching it, what he has found then seems likely to be evidence that humans who had just expanded Out of Africa contributed to the genomes of Neandertals. In other words, modern human introgression into Neandertals. Of course if the gene flow was from modern human to Neandertals exclusively, then it would be an evolutionary dead end since that lineage went extinct.

In any case, for several decades some fossil-based paleoanthropologists have been claiming that there are “intermediate” individuals in the record which indicate modern human-Neandertal hybridization. Most prominently Erik Trinkaus. If Paabo’s finding becomes more solid, then it seems time to update the probabilities on these sorts of claims based purely on morphology.

The story is taken up at Ad Hominin, where the following opinion is expressed:

Today, most researchers acknowledge that some sexual encounters could have occurred between Neandertals and modern humans. The more interesting question is how common were these encounters and did they leave their mark on the modern gene pool. Undoubtedly, modern humans and Neandertals would have recognised each other as fellow humans but this does not mean that they would have acted humanely to each another.

Countless social and psychological studies have shown humans to have a very strong “us versus them” mentality, that no doubt also existed in our ancestors. It is unlikely that modern humans and Neandertals had an easy relationship. Most sexual encounters that took place between the two were likely opportunistic and probably involved enslavement and rape.

Of course we have absolutely no evidence regarding the circumstances under which these liaisons may have taken place, and I imagine the last sentence of the quote above is obliquely referring to the way in which the indigenous Indian populations of the Americas were almost wiped from the face of the Earth by the tide of white Europeans, who staged one of the most brutal and violent land-grabs in recorded history, as they claimed other peoples’ territories for their own, killing thousands in the process.

However, Upper Palaeolithic Europe was a very different place to the Americas of a few centuries ago, with no centralised governments, mobilised armies, or even slavery, as suggested above. I’m not even sure what the duties of a putative slave in the UP would actually be, or how such a state of affairs could even be enforced. The sheer numbers of humans involved in the theft of native peoples’ lands far eclipsed the populations of Ice Age Europe, so although there might have been competition for land and resources, it would have been on a far smaller scale than in modern times.

Moreover, the technological and cultural gap between Neanderthals and incoming moderns was comparatively narrow, as opined by Professor Chris Stringer of the Natural History Museum in London:

“It’s possible that Neanderthals and humans were genetically incompatible, so they could have interbred but their children would have been less fertile,” said Stringer.  This phenomenon is seen in many other species such as when lions breed with tigers and horses breed with zebras.  “I used to believe Neanderthals were primitive,” said Stringer, “but in the last 10,000-15,000 years before they died out, around 30,000 years ago, Neanderthals were giving their dead complex burials and making tools and jewellery, such as pierced beads, like modern humans.”

The popular notion of inter-species sex, as apparent in the previously quoted post, was that brutish Neanderthal men had their wicked way with anatomically modern women by dragging them behind the nearest bush, reinforcing the old stereotype of rapacious cavemen that has so blighted the way in which our archaic ancestors have been viewed for nigh on 150 years.

Because the population of Europe in the Upper Palaeolithic was probably very low in both modern and archaic communities, contact was likely to have been infrequent – indeed it seems quite possible that members of both species lived entire lifetimes without encountering one another – as Neanderthal numbers began to decline, any encounters would become increasingly rare.

And when moderns and Neanderthals did make primary contact, it could have been under any number of circumstances, some of which may have resulted in violence and death, whilst others might have developed into co-operation, friendship, up to and including, romance and kisses. Yet other encounters might have ended in polite ‘nice-to-meet-you’ handshakes, after which the two species quietly got on with minding their own business, without harbouring any particular feelings for or against their new acquaintances.

As a brief aside, I can’t help but speculate that it might have been easier for Neanderthal women to give birth to inter-species offspring than their AMH counterparts – bearing in mind that Neanderthal babies were more robust, the shape and size of their skulls, even when hybridised, would have made it more difficult for AMH mothers to give birth. A Neanderthal woman who had conceived a child fathered by an AMH male would maybe have found it easier to give birth to the hybridised and possibly smaller baby she was carrying – so should we expect to find that hybridised children conceived by Neanderthal women survived in greater numbers than those conceived by AMH mothers? And how would we then consider the evolutionary social factors that led to relationships between the two species that caused AMH men to bond and breed with Neanderthal women? Such a question may be answered in part from this further quote from Ad Hominin:

The recent announcement by Svante Pääbo that he is sure that Neandertals and modern humans had sex is quite a bold pronouncement coming from a scientist. It raises the question of whether this ascertain is based on some hard evidence they found while sequencing the Neandertal genome. It is possible that if there was some Neandertal genes passed on to the first moderns in Europe, they could have got eliminated from the subsequent gene pool as population sizes fluctuated during the more severe climatic episodes. A more likely scenario is that Pääbo’s team found evidence of modern introgression in the Neandertal genome. In all likelihood the incoming modern humans were more numerous than the Neandertals, thereby absorbing the endemic populations through genetic swamping.

This would seem to reinforce the point that any enforced sex is more likely to have been instigated by incoming AMH males on the female Neanderthal population, if we are to take modern history of human conquest and genocide into account and apply the same mind-set to life 30,000 to 40,000 years ago. But the fact that the both modern and archaic populations may have co-existed in Europe for 10,000-15,000 years at least hints that there was no large-scale or organised species cleansing undertaken by AMH, and it’s quite possible that both they and the Neanderthals behaved a great deal better towards each other than has often been the case in our own recorded histories.

It remains to be seen whether this latest research is able to resolve this question of interbreeding, or whether instead tentative clues will emerge that raise more questions than answers.

15 thoughts on “Sex and the Single Neanderthal: Inter-Species Breeding in the Upper Palaeolithic?”