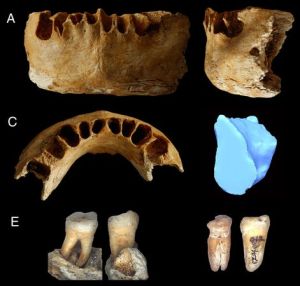 Several views of a human jawbone and molars found in a Chinese cave.

National Geographic is running news that Erik Trinkhaus and others have published the findings of the oldest modern human outside of Africa, specifically in China. Not much is given on the locality and specifics of the fossil, but the article does state that the fossil mandible fragment and teeth are 60,000 years older than any other modern human fossil. That leads to some curious questions of interbreeding with other Homo species and curiosities about the presence of modern humans that did not ‘act’ modern… In other words, the archaeological record isn’t quite on the same page.

Hawks hasn’t posted on the paper and find yet, but he is quoted in the National Geographic article saying the mandible dimensions are within range of both Neandertals and modern human. Unsurprisingly, the Out of Africa theory is challenged. I still don’t know what to think of it all, the chin does look very robust.

The PNAS article is not yet published at the time of the National Geographic writing and me blogging this post. Seems like people are still jumping publication embargoes. I shouldn’t have to call out what a cheap shot it is to have sensationalist news getting out before the first hand reports do. I guess things will never change. So until I get my hands on the real paper, I’m just calling it as others are reporting it.