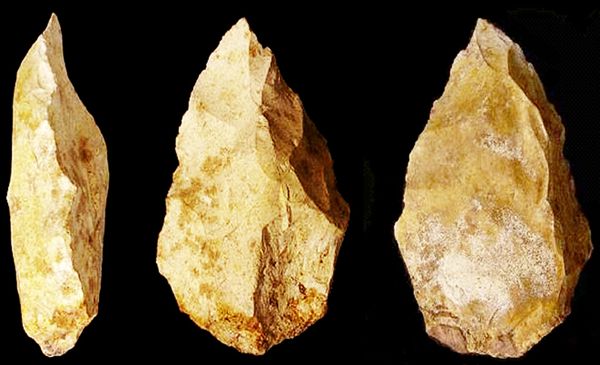 Hans-Peter Uerpmann of the University of Tubingen has lead a team excavating the Jebel Faya site in the United Arab Emirates, right near the Straits of Hormuz. They’ve found 125,000 year old stone tools that look like early modern human tools from East Africa around the same time. They’ve published their findings in today’s Science, under the title, “The Southern Route “Out of Africa”: Evidence for an Early Expansion of Modern Humans into Arabia.”

The current understanding is what we know as anatomically modern humans (AMH) originated in Africa about 250,000 years ago. The oldest Home sapiens, known as H. sapiens idaltu, was found to be 160,000 years old, found at the Middle Awash site in Ethiopia. Then between 80k-100k years ago, modern humans began appearing in the middle east, as remains from sites like the Qafzeh cave in Israel have yielded. Most agree that AMH stayed in Africa and about 140,000 years ago they began migrating out. There was an exception, a colonization remained or failed in Israel about 100,000 years ago.

These hand axes, pictured above, show a pattern of flaking distinct from that made by Neandertals and also dissimilar to those by ~100,000 year old Israeli tools. They are two sided and very similar to stone tools seen only in early Africa.

What this means is early humans left Africa 20,000 years earlier than thought. Just how did they do it? 130,000 years ago, there was a window of climate change. They figured this out by using luminescence dating to determine the age of sand grains buried with the stone tools. Luminescence dating is a technique that measures naturally occurring radiation stored in the sand. The data showed that 130,000 years ago, the Arabian Peninsula was relatively more warm which caused more rainfall, turning it into a series of lush habitable land. During this period the southern Red Sea’s levels dropped and was only 2.5 miles or 4 km wide. This offered a brief window of time for humans to easily cross the sea and cross the Peninsula to opposing sites like Jebel Faya.

Does this study tell us that modern humans left Africa, into Arabia and out from there? It is most certainly a possibility. However, these axes could be of an abandoned migration like the site in Israel I’ve mentioned. I say that because no genetic clade, be it from mitochondrial, Y-chromosome, or somatic genome, shows an earlier divergence of modern humans from Africa earlier than 60,000 years ago. At the very minimum a find like this tells us humans left Africa a bit sooner than we thought, but does not really tell us that these were the humans that helped seed the Eurasia.