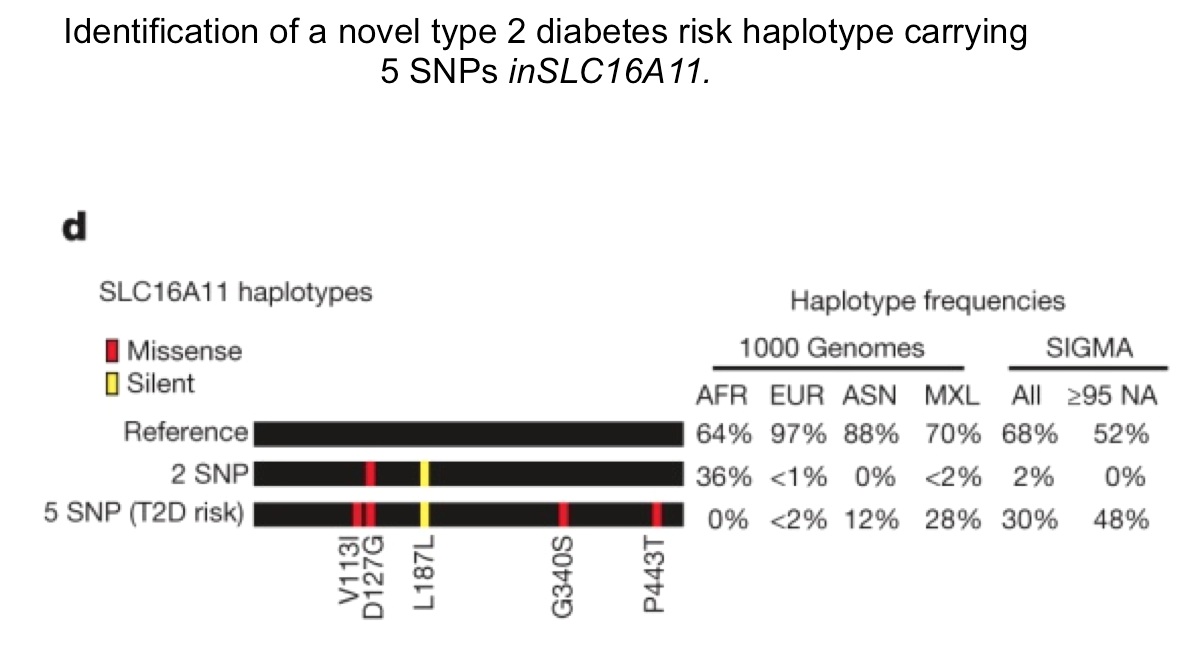 Why do some populations have increased incidences of chronic disease? Why do blacks have hypertension more than whites? Why does a Mexican have 2.72 more the risk of having Type 2 Diabetes compared to a non-Hispanic person? A new paper published in Nature yesterday outlines a particularly interesting finding about rhetorical questions about metabolic disease… One that I’ll digest in this post.

David Altshuler and his colleagues conducted a GWAS comparing 8,214 Mexicans and other Latin Americans. They specifically had 3,848 people with type 2 diabetes and 4,366 non-diabetic controls. They compared over 9.2 million SNPs. They found a unique SNP, SLC16A11, that codes for a transmembrane transporter of monocarboxylates and triacylglycerols.

The authors found that why Mexican Americans are twice as likely to develop type 2 diabetes is because about 50% of the population carry the four amino acid substitution risk haplotype. In comparison, 20% of Asians have it, only 2% of Europeans carry the mutations, and no Africans. The risk for Type 2 diabetes for a Mexican increases from 13% to 19% if they inherit two copies of the mutations, but others the risk only increases to about 11% from 8%. They tend to carry this one sequence of DNA more than people with only African or European ancestry.

Why and where did this increased frequency of SLC16A11, come from? The haplotype sequence is highly divergent, with an estimated TMRCA of 799,000 years to a European haplotype. This date long precedes out of Africa but yet it’s not observed in Africa and rare in Europe. When the authors compared it to the published Neandertal genome and the Denisova genome, they found no similarities.

But when they compared it to the unpublished genome of the Neandertal from Denisova Cave they found that individual was homozygous across 5 kb for the 5 SNP haplotype at SLC16A11, including all four missense SNPs, outlined above. This indiciates that the risk haplotype introgressed into modern humans via admixture with Neandertals.

The impact of Neandertal introgression is now well-known. Up to 4% of our genomes, for those of us who are non-African, have Neandertal sequences in them. Does this mean that Mexican’s have more than the average admixture? No. The authors write,

“We note that whereas this particular Neanderthal-derived haplotype is common in the Americas, Latin Americans have the same proportion of Neanderthal ancestry genome-wide as other Eurasian populations.”

We know obesity and diabetes are two epidemics that are hand in hand. As SLC16A11 codes for a protein that transports lipids, any changes to its structure and function can change the amount of a type of fat which moves in and out of a cell. These findings suggest that some Mexicans and even Asians inherited a variant of SLC16A11 from Neandertals, which increases risk of type 2 diabetes.