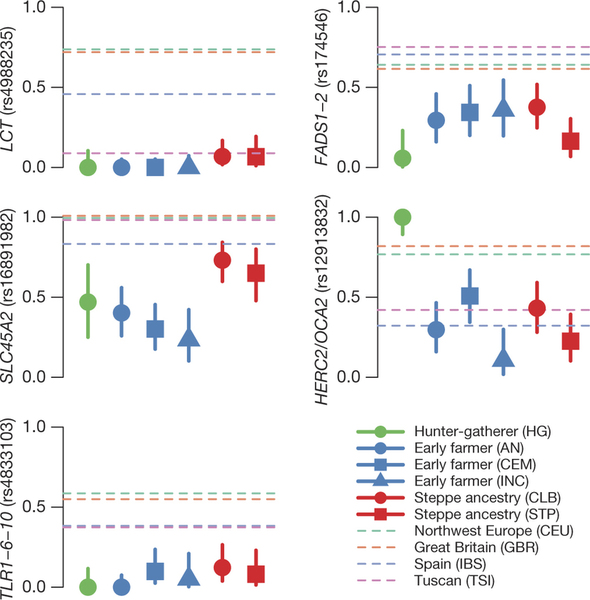 That recent study published in the journal Nature, that I commented on last week, also documents that Europeans began digesting cow’s milk about 4,000 years ago and that was all thanks to a group of nomadic Russian herders from Great Steppes. This contradicts a long time understanding that the genetic mutation for lactose tolerance was introduced by Anatolian farmers from modern-day Turkey, who started raising cattle around 6,500 B.C.

The study examined DNA from the remains of 230 Eurasians who lived between 6,500 and 300 B.C. The authors discovered that the mutation that lets adult Europeans produce lactase throughout their adult lives was introduced right at the time that the Russian herders arrived in Europe.  Here’s an excerpt from the original paper,

“The strongest signal of selection is at the SNP (rs4988235) responsible for lactase persistence in Europe15, 16. Our data (Fig. 3) strengthens previous reports that an appreciable frequency of lactase persistence in Europe only dates to the last 4,000 years3, 5, 17. The allele’s earliest appearance in the dataset is in a central European Bell Beaker sample (individual I0112) dated to between 2450 and 2140 BC.”

If you pay attention to the figure I’ve included, the graph in the left upper corner documents how the SNP for persistent lactase derived from Steppe populations and not early Anatolian or Central/Iberian populations.