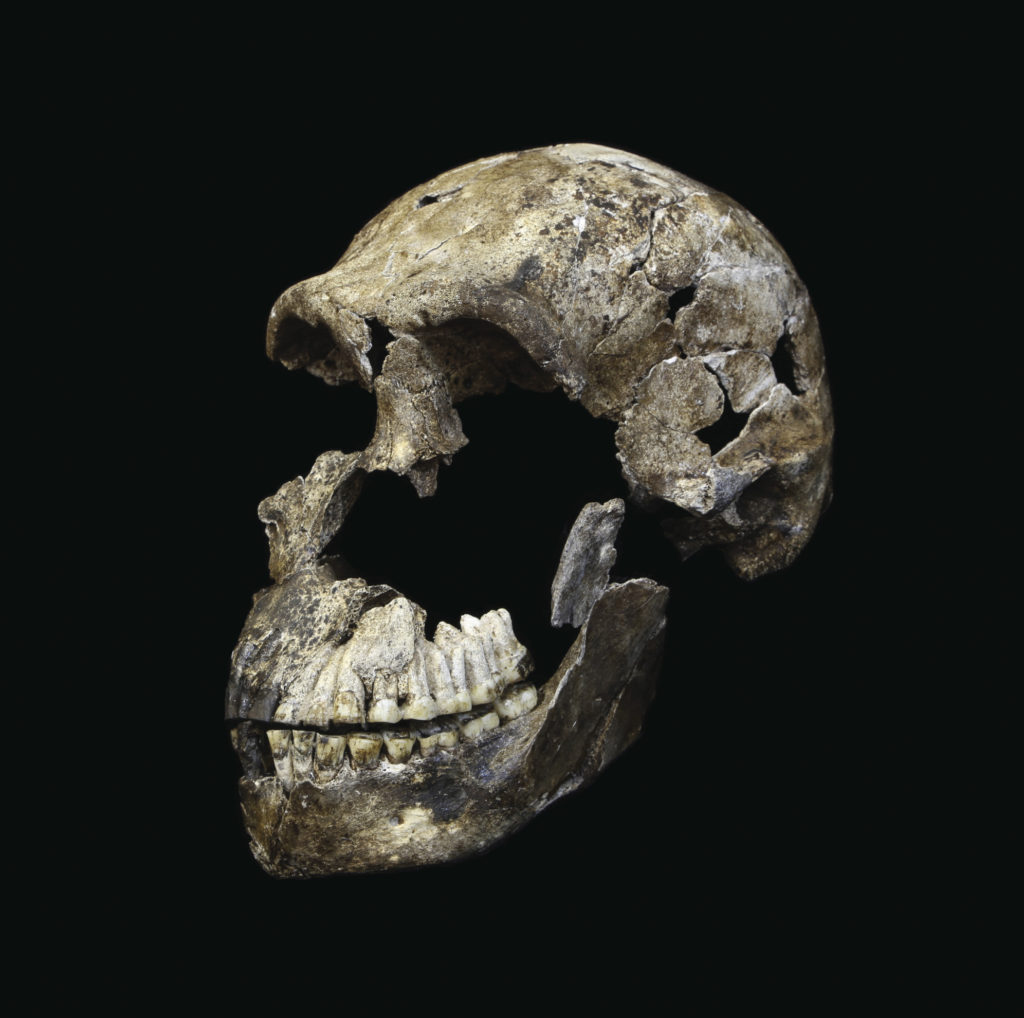 A couple weeks ago, I introduced that H. naledi may be much younger than we thought it was. Razib’s recent post points out three new eLife open access papers from Berger and Hawks that continues this discussion. These papers specifically document new remains from the Rising Star cave system and the dating of these remains. In 2013, the remains of 12 individuals from the Dinaledi chamber were discovered and published in 2015. We didn’t know about the any additional remains until now.

The publications  outlines the findings from the Lesedi chamber, which is about 100 yards away from the Dinaledi chamber. There are at least three new individuals – two adults and a 5 year old child. One of the adults, Neo, is made represented as a partial male skeleton with a remarkably well-preserved skull, as pictured below and documented in Hawks’ lead. The team describes the skull of the skeleton as “spectacularly complete,” and the other adult and children specimens from the Lesedi chamber are nearly identical in every way to those from the Dinaledi chamber, a remarkable finding in and of itself.

The dating of Homo naledi concludes one of the multi-authored papers led by Paul Dirks. The team used a combination of optically stimulated luminescence dating of sediments with Uranium-Thorium dating and paleomagnetic analyses of flowstones to establish how the sediments relate to the geological timescale in the Dinaledi Chamber. Direct dating of the teeth of Homo naledi, using Uranium series dating (U-series) and electron spin resonance dating (ESR), provided the final age range. Ultimately, six independent dating methods dated this population of Homo naledi remains to the late Middle Pleistocene, 226,000 and 335,000 years ago. This means H. naledi survived for as long as two million years alongside other species of hominins in Africa, leading to the thought that Homo naledi may have lived at the same time as the first modern humans.

In an accompanying paper, led by Berger, the concept that such a primitive looking species lived at such a time and place, possibly alongside modern humans is addressed Berger comments,

“We can no longer assume that we know which species made which tools, or even assume that it was modern humans that were the innovators of some of these critical technological and behavioural breakthroughs in the archaeological record of Africa. If there is one other species out there that shared the world with ‘modern humans’ in Africa, it is very likely there are others. We just need to find them.”

The discovery of this second chamber supports the claim that Homo naledi deliberately disposed of its dead in these remote, hard to reach caverns, as there is now more individuals interned in the Rising Star caves, further implicating these otherwise primitive looking beings had complex behaviors such as burial. There are theories they could have been chased into the caves, or stormed out, but we cannot deny the hypothesis that they were buried. More and more studies lately are showing that the evolution of humans was bushy, messy and complicated. It was not just a steady linear progression from the primitive Australopithecines to more modern Neanderthals and fully modern humans. Instead, various species lived alongside each other and in some cases interbred.

2 thoughts on “Homo naledi May Have Made Tools, Buried Dead, Lived Alongside Humans”