New ancient DNA discoveries from an ancient 124,000-year-old Neanderthal femur suggests modern human ancestors interbred with Neanderthals between 470,000 and 220,000 years ago. This is much earlier than previously thought. Cosimo Posth at the Max Planck Institute for the Science of Human History led analysis of mitochondrial DNA from an ancient Neanderthal thigh bone discovered 80 years ago in Germany, the Hohlenstein-Stadel femur, discovered in German in 1937. He picked and compared the sequences to Denisovans, and ancient humans with the premise that the more similar the sequences are, the more closely related the specimens.

We’ve studied DNA from a 130,000-year-old Siberian Neanderthal and found genetic chunks that looked human, but humans didn’t engage in mass migration from Africa, their home turf, to Europe, Neanderthal territory, until 75,000 years ago. Unless that happened earlier, from a small group of archaic humans who left Africa more earlier and interbred with Neanderthals before the big migration of more modern humans which fits with other recent findings that our lineage is possibly older. 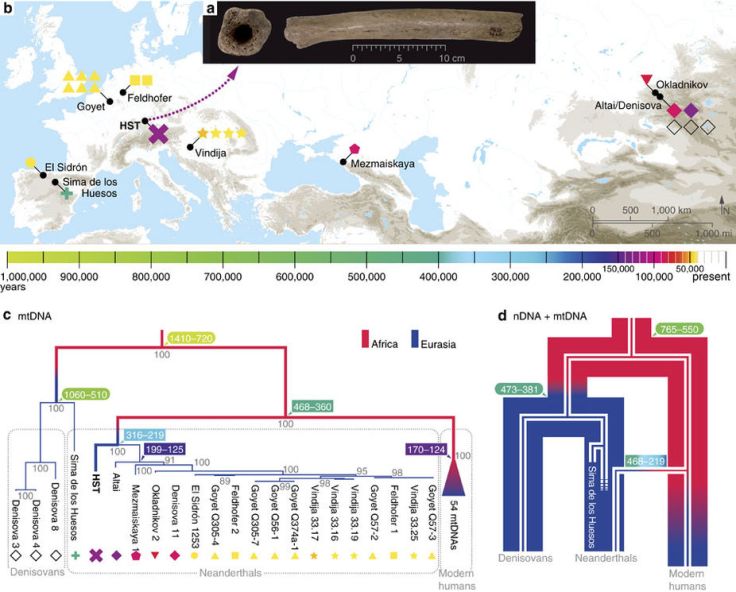 One limitation is that mtDNA is one small piece of the larger genetic puzzle and does not give the resolution that nuclear DNA does to trace deep lineage. The particular sample studied is limited from contamination and nuclear DNA is a mute point.

2 thoughts on “A Deeper Introgression Of Ancient Humans and Neanderthals”