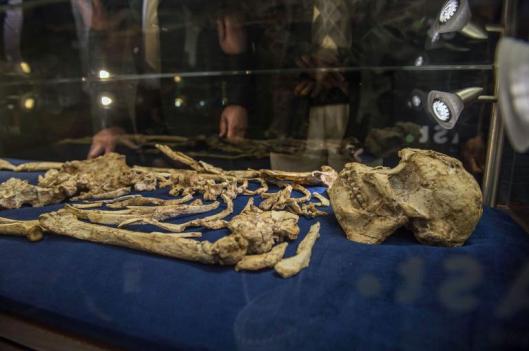 The skull of Australopithecus prometheus, known as “Little Foot,” is on display now.
PHOTOGRAPH BY MUJAHID SAFODIEN, AFP, GETTY

Two days ago, Little Foot, Stw 573, the near-complete Australopithecine skeleton dating back 3.67 million years was  unveiled at the Hominin Vault at the University of the Witwatersrand’s Evolutionary Studies Institute in Johannesburg, South Africa. Little Foot was found a bit nontraditional in ’94 by Ron Clarke, who was sifting thru some animal bones from South Africa’s Sterkfontein Caves.

He found four fragmented hominin foot and leg bones and sent others to more extensively uncover the remains. Clarke realized he found something highly significant which lead into a 20 year excavation. This yielded a skeleton that has more than 90 percent of its bones intact, save parts of its feet, pelvis, and kneecaps… Making it the most complete and oldest skeleton of a human ancestor older than 1.5 million years ever found, more complete than Lucy. Not surprisingly, Clarke, along with other international experts, will soon release more than 25 scientific papers on the research. The results are expected to be published next year.