PNAS published a new paper documenting Neanderthals wielded fire to shape wooden tools as early as 171,000 years ago. The tools, or digging sticks, are still in use today. They are useful for digging up roots and tubers. They are also useful in hunting animals in burrows or pounding and grinding herbs. They way they made them are similar to modern Bindibu, Hadza and San. 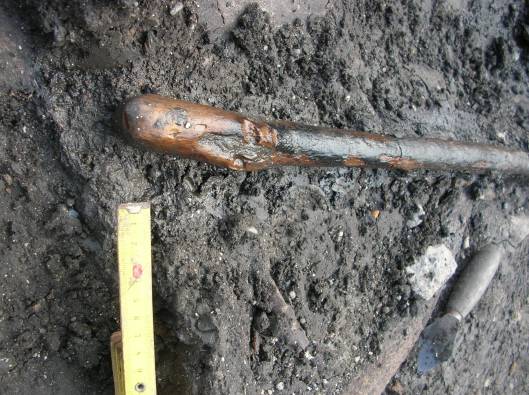 The handle of a digging stick from Pogetti Vecchi. PNAS

The site is in Tuscany and is called Poggetti Vecchi. It was excavated in 2012. 170,000 years ago grasslands and marshes surrounded the shore of a lake here, according to sediments and pollen analysis. When it was excavated, archaeologists found 39 broken sticks assortment among stone tools. Of the fragments, 4 pointed tips, 6 rounded handles and 31 pieces of shafts survived.

When the archaeologists honed it, they noticed that one of the digging sticks had a charred black film and was fractured as if it burnt. Chemical testing confirmed that the wood had, in fact, been charred. Shockingly, so has 11 of the other finds. The utility of charring the surface of the wood makes it easier to scrape off the bark and shape the ends.

This finding makes the Poggetti Vecchi digging sticks the earliest clear examples of wooden tools shaped with fire. This sticks show that even early Neanderthals chose the best wood for the tool and utilized both fire and stone tools in order to produce a finished tool which took a great deal of planning, trial and error with knowledge, and painstaking, precise work to pull that off. This further demonstrates the sophistication of Neanderthal tool-making abilities almost two hundred thousand years ago.

7 thoughts on “Neanderthals Wielded Fire to Make Digging Sticks 170,000 Years Ago In Italy”