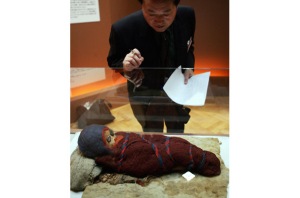 A journalist looks at a baby mummy from 5 B.C. to 3 A.D which was unearthed at an ancient tomb in the Chinese city of Qarqan. When Qarqan citizens were buried, their eyes were covered with stone chips, their faces masked by cloth, their mouths sealed by gold foil and flour paste, and their noses plugged with wool.